back to school season is beginning its full swing. during this season, we get a case of the crazies and weird clientele that normally do not shop at officemax. we also get a string of idiot theives. a couple of my favorite old stupid theif stories:

- a guy stole a norton antivirus and the assistant manager followed him down the street and caught him hiding behind some bushes in a car lot. he said "sir. i SEE you. so did our cameras. so why don't you save us all a bunch of stress and heartache and hand the software over so we don't have to get the police involved." he forked it over. (we also have zero security cameras, by the way.)

- a car salesman was in making a ruckus about dumb things (car salesmen are the WORST clientele, under only doctors, i think.) he wanted to bargain and barter for prices (hi. this is officemax, not a car lot, it doesn't work that way here.) he was a jerk the whole time and then had the audacity to hand me a business card and tell me to look him up if i want to buy. during the whole ruckus, he ate a king size reeses peanut butter cup and ditched the wrapping, which management found about an hour after he left. i chimed in "OOH OOH I KNOW WHO DID THAT!" the store manager took his business card and called him, telling him to come pay for the candy bar, otherwise he would prosecute him to the full extent of the law for theft.

other people i've had recently:

- we have these impulse buy items at the registers that you stick on your dashboard of your car, are somewhat sticky, and will hold your cell phone and other items so they're close at hand and don't fly all over the place. five million people, give or take, manhandle these every single freaking day as they're checking out, which means that they're not overly sticky. and since i'm about the only employee that ever washes them.... an insurance sales guy that was being a jerk to me the entire transaction put his cell phone on the display where it says 'test here' and promptly picked up the cardboard display, gave me a dirty look, and flipped it over, causing his cell phone to fall onto the counter. "it doesn't work." he said snarkily. i replied "sir, if your driving is such that your dashboard does THAT, i think you have bigger concerns than whether or not your cell phone is in place." he shut up, glared at me, snatched his business card from me and left. fine, i don't have a car anyway, and if i did, why would i want to pay YOU and your jerk ass for insurance?

we're also starting to get the paranoid picky people in that normally only shop there this time of year. the people that constantly accuse you of not being intelligent enough to bag their items. the people that quite rudely insist you double bag. the people that hold their merchandise tightly against their chest and glare at you as they hand you one thing at a time, watching the screen suspiciously to make sure it rings up correctly, and take it out on YOU because YOU PERSONALLY caused that to ring up ten cents more. the people that come in during our busiest time of the day, ask for five hundred pieces of furniture, and then get irate because it's not up at the register in five minutes or less. the people that swear they've purchased something there every single year and can't find it (as this is my fourth back to school, i can vouch for the fact that we have NEVER carried that item.) so they're going to go to STAPLES. (these people always say it loudly and then pause to gauge your reaction as if threatening to go to a competitor magically opens up more merchandise for them to choose from. "well, gee, since you said you'd go to depot, i guess i can show you my horde of peechees in the back!")

TEN DAYS UNTIL MY THREE YEAR ANNIVERSARY. freaking woo. the only other job i've ever worked at longer than this was the I.C.E. Gallery in phoenix (international cruise and excursion gallery for those of you that haven't been around since my phoenix days.)

my head is killing me, but i must go to work, alas.

so i crashed for a moment to try to settle my booming headache.

heh, i was supposed to be to work an hour ago.

i wonder if they'll send a car to see if i'm a bloated corpse. i've never pulled a no call no show. granted, it won't REMAIN a ncns, but still.

great thing to happen right as i'm begging for my review.

now if my right eye would stop feeling as if it is going to esplode from my face.

and apparently i have 2 vox invites. email me at aubkabob@comcast.net if you want them.

or if you just want to email. i'm thinking email is sort of a lost form of art, what with the texting and all.

footnote: bacci has been VERY loveable lately, which has put me on guard. she begs - BEGS! - to be petted and lets me hold her for long periods of time, something she has never done. 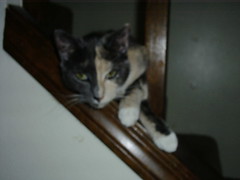