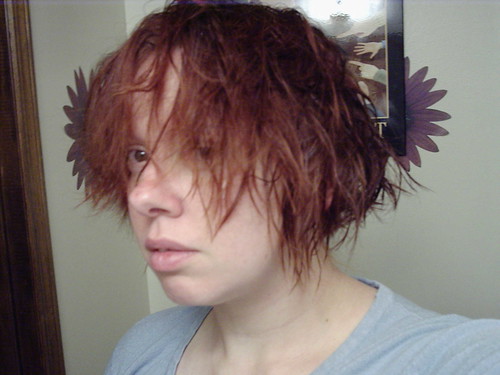 and in further proof that i'm not a hairy person, i have never plucked my eyebrows in my life.

yeah, so i got me one of them thar pivot flat panel monitors (only a 17"), and.. i think i'm having a technogasm. i am now a believer. it makes reading friends lists SO much easier, with so much less scrolling, and i have so much more room on my desk!!

shite day at work. people were jerks, and i actually thought that a fight was going to break out in my line. i knew that people could be stubborn jerks, but i never thought i would see a... forty year old BULLY. seriously. cut in front of everyone and said that the people that HAD been next in line - a couple approximately in their 80's - pulled attitude with him, so he was going to refuse to let them go ahead of him. i'm generally all for fairness when it comes to lines - one of my GIANT pet peeves - and will usually use my customer service title in order to boot out the offender and take THE NEXT PERSON IN LINE, no matter how much faster the other person was in getting to my line. but this guy TERRIFIED me, so i took his two dollars for his stupid book covers and let him leave. i talked to the next people in line and apologized profusely, and let them know that under normal circumstances, i will be completely happy to demand that the person go back to the end of the line, but in this case, i felt that it was best to just get the 6'5" jerk OUT of there so that we could go about enjoying our evenings. i also reminded them that while it was a difficult few minutes to deal with him, that at least we don't have to LIVE with him, or work with him.

got singled out in my ear training class because i have about as much rhythm as a straight white man in a dance club. had to correct my issue with the bars in front of everyone... the funny thing is that when i was saying my 'ta's completely different from everyone, i was 1000% convinced i was the only one right, and that everyone else had gotten mixed up somewhere... until i realized that Professor Trousdale was NOT talking to the guy behind me. also got a very obvious question very obviously wrong in front of the class in music theory. ooooooooh, crap, i totally forgot i have homework in that freaking class. grr.

but i'm beyond freaking tired, so i am trotting off to bed now.

well, as soon as these contact lenses get the hell out of my eyes, that is.
Collapse