As a preteen, I really wanted this album:

But, instead Santa brought me this album: 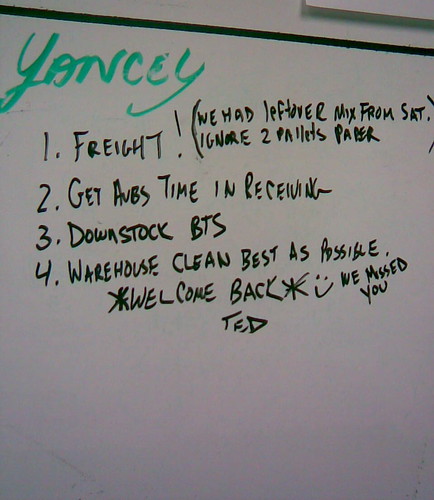 Bacci has tales to tell, oh yes. She's curled up on my lap (and the keyboard), filling me in on her day. "Meh. Meeo? Meh. mah. Meh? *PURRRRRRRRRRR*" She's been quite clingly the last couple of days.

Only one more day of working 4 am until noon, then it's back to Midnight to 8 ams. Assistant Manager Jason and I hashed out reasons why we (Ted and I) should be on overnights vs. during the day, and methinks I won. He said he would plead my case to Capt. Kirk when he returns from vacation next week. Three people working only four hours before we start cannot accomplish nearly enough - we would be only working freight, never having time for anything else. I love working with him, once I got used to his sense of humor. I even flat out told him one time "You really terrify me, sometimes." and meant it whole-heartedly. Now that I'm used to his oddness, .... you know the episode of Family Guy where Peter finds out he's mentally retarded? There's a part where he gets a helper who has Peter high five him whenever he does something good. Peter high-fives him, then claps excitedly and laughs dumbly. That's pretty much me, working with Jason.

The next two days are also the last two days I'll be working with Yancey for a looong time. This saddens me.
Collapse