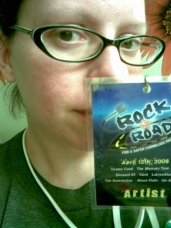 Home from the concert for the Taija Belwood Foundation benefit show. Met some fabulous new musician friends and reunited with old. Everyone was beyond nice and wonderful during the whole thing. I'm beyond honored to have been a part of it.

Slept for only a very sporadic two hours last night. I was deathly afraid of oversleeping my alarm again, so any time I even slightly rolled over, I would wake up fully and look at the clock in horror. Dreamed chaotic dreams. The entire dream was in a dusky blue, as if it were twilight. The sky looked a lot like the sky in Outland, for you fellow WoWers: giant planets in the sky. I was sad about something, like a lost love, or lost opportunities or something. I felt a pain in my right foot and looked down, and had a large piece of glass embedded into the ball of my foot. (The rest of the dream was spent limping around and bleeding.) Each time that I would begin to dwell on whatever reason it was that I was sad, Kevin Griffin would stop what he was doing (packing to leave home or something equally sad, about leaving something important behind) and come over to where I was, handing me a piece of toast. "I don't really want toast." I would say. He would reply, "Eat it, you'll feel better. I put extra butter on it."

I did feel better each time I ate his magic toast.

Now I'm beyond beat and ready to bathe and bed.
Collapse