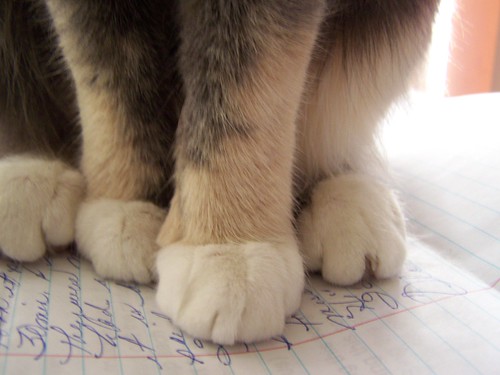 Home from the dentist. I worked REALLY REALLY HARD the last year in order to get my mouth from a horrid peridontitis issue to what it is today. Almost zero bleedy gums with all the implaments of torture thrown at it. I would say that out of the last 365 days, I've flossed for at least 350 of them. About the only thing that could have made my cleaning be any easier is if I actually used toothpicks. My lady was quite happy and pleasantly surprised.

I apparently have a new cavity (dangit!) and have a fractured tooth (eek!) which need to be fixed. One filling and a crown will cost $765 - AFTER insurance. They asked if I wanted to set up a payment plan - I told them I would get back with them.

Did my brother a favor and picked up his check and deposited it for him. (Reminder: the roommates are in Hawaii at the moment.) He couldn't figure out why it wasn't showing, so I called them... to discover they had put it into someone else's account. Apparently typing in "Jesse Harrington" vs. "Jessie Herrington" will cause this to happen. It's now fixed.

So very thankful that I have a solid two days off after my 6 am shift tomorrow.

Have a weird craving for Lackey's Talia books.

Heat wave coming this weekend, but today was almost perfect... until it hit 70 degrees. I hath discovered that my time away from Phoenix hath caused my heat quota to be in the mid 60s.

I'm such a weather weenie.

The news is asking where I was when St. Helens erupted. Lessee, I was five, living in a tiny town in Iowa.. and completely oblivious. I can see St. Helens quite clearly from where I live in its beautiful whiteness.
Collapse